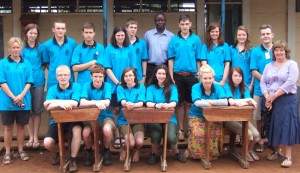 Gareth and Christine Hughes and Peter and Rhiannon Hughes visited Namutumba again in January,cementing relations with the project leaders there and teaching lessons at KCN.

Meetings are held with local farmers (BURUMUDA) and the Namutumba Disability Group with a view to helping them in the future through the Ross-Namutumba Link Organisation.

Rhiannon and Peter visited Mulingirire PS which has a long-standing link with Riverside (Hunderton) PS, Hereford taking out a donation for books.

They take part in the established programme, adding a musical dimension to it as well as painting another mural with KCN students.

Three Ugandan visitors visit Ross. Hope Ssonko, Deputy Head teacher at KCN, Herbert Sagoma, head teacher of St Mulumba PS which is linked with Whitchurch PS and long standing driver, Sulaiman Kasiba. They were hosted by friends of the Ross-Namutumba Link and Whitchurch PS. The highlight of their visit was a meeting with the Ross Mayor, David Ravenscroft where gifts were exchanged with Namutumba’s Council.

The Ross-Namutumba Link organisation begins to send help to the Namutumba Disability Group. Funds are sent for sewing machines and wheelchairs and also to help build a private boarding school for the disabled which will enable them to become more self sufficient through the funds that will be generated..

The Namutumba Disability Group start to use the new school buildings in May 2012 and have 52 pupils on roll. 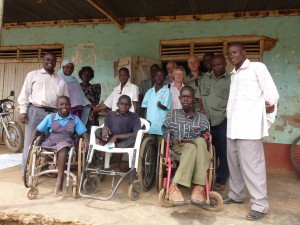 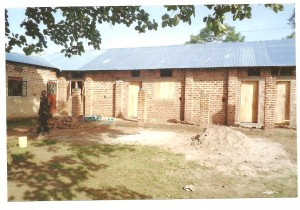 Since then, desks, chairs, books, paper and office equipment have been bought so that the school can function fully.

The school now has a kitchen and latrines and the latest addition in January 2013 is a roof catchment water scheme which includes a water tank so that pupils do not have the need to to walk twice a day to a well half a mile away, carrying heavy jerricans of water. 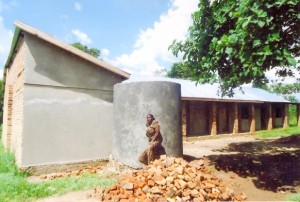 James Mugenyi, Deputy Head at Kisiki College visited Ross for the third time and met old friends. He was invited to meet the Mayor, Cllr. David Ravenscroft and Ross Lions. He also took part in services at Ross Methodist Church and the New Life Church. He met with a group from the Catholic Church who presented him with a cheque for a Catholic School (Kalamira PS) in Namutumba. 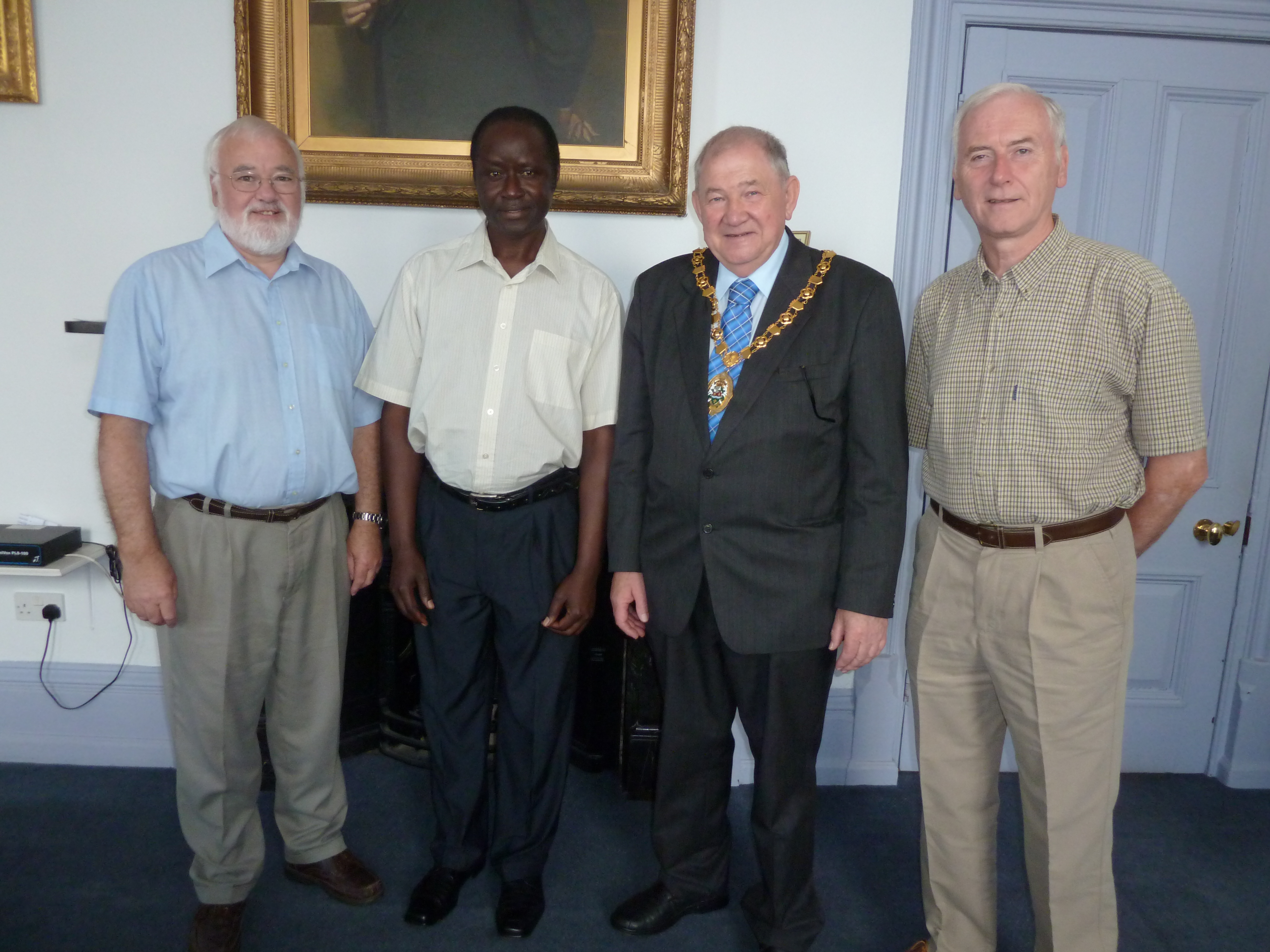 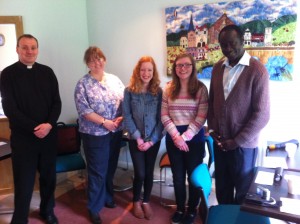 In July 2012, fifteen more sixth formers from John Kyrle High School visit Kisiki College, led by Jim Herbert, Lesley Bagshaw and Ruth Till. They followed the now well-established programme at Kisiki and visited the DMU to give out more mosquito nets as well as visiting linked primary schools. The major event, however,was the official opening of the Technology Block by the Ugandan Minister of Education and Jim Herbert on behalf of the John Kyrle  High School.

2013
This year was the twentieth anniversary of the start of the link and lot happened. 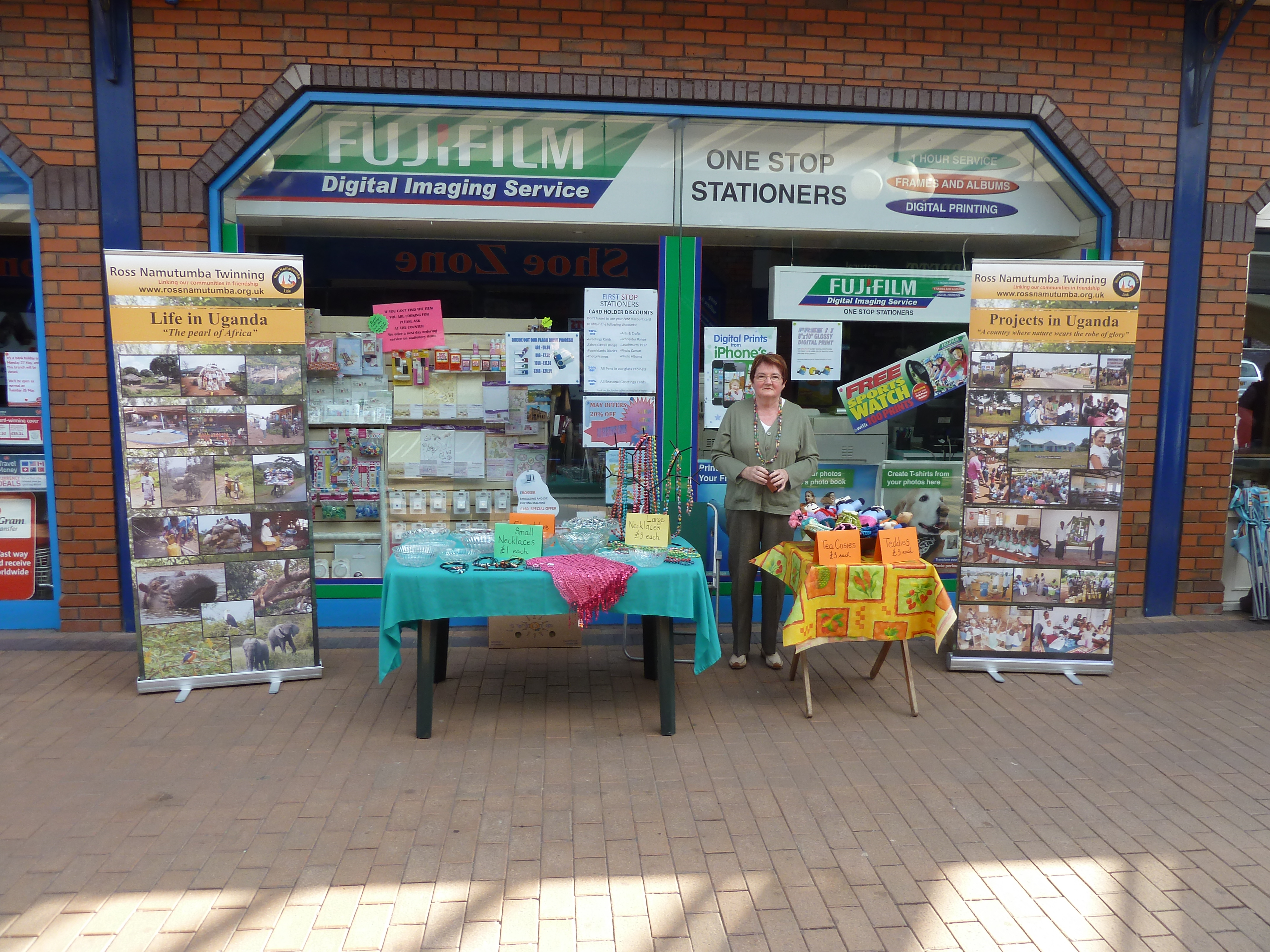 On Mayday the Ross Namutumba Link Organisation set up stall in the Maltings and were pleased to have very successful sales and publicity. Also in May, two past JKHS pupils visited Kisiki College – Sophie Gauntlet and Megan Husbands. They stayed for six weeks and both taught in the school, visited primary schools and Sophie, who is training to be a nidwife, spent a great deal of time in the District Medical unit.
Alison Raine visited Namutumba in June and spent a month there coaching netball and teaching.
A highlight for people in Ross was the visit of the headteacher, Mrs Irene Nairuba and English teacher, Ms Annet Nsuba. They stayed with several members of staff of JKHS, taught at the school, visited several linked primary schools and visited several tourist spots. The three photos show them in a Ross Lions meeting, visiting Stratford and outside the Ross Namutumba link shop. 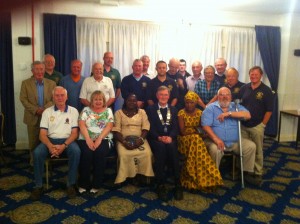 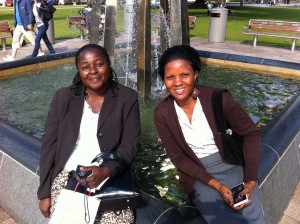 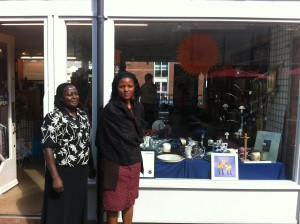 The JKHS annual visit in July was a great success. The group spent a week at Kisiki College and participated wholeheartedly in a range of activities. The photo shows them in front of their finished mural.

The Ross – Namutumba twinning group overlapped with the school group and then stayed on to work in a variety of fields. Dr Russell Mellor worked in the Medical unit whilst his son, Chris coached Rugby and Cricket at KCN, Jan taylor and Rob Seddon worked in Namutumba Primary School – Ashfield Park School’s link whilst Alison Caligari and Nuala Robinson worked in Gorsley’s link school – St Michael’s and had the bonus of sampling the real Africa by staying in a house in the village.
Ffion Robinson divided her time between teaching at KCN, Namutumba Primary School and coaching with Chris Mellor. She also spent some time with the Ross link projects. Gareth and Peter hughes visited all the projects undertaken by the Ross-Namutumba link organisation (details of which can be seen on the links page). 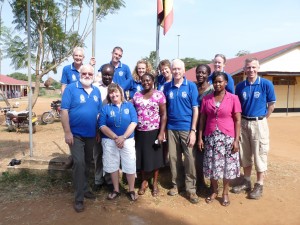 The final photo in this group shows the sparkling ladies of Kisiki College dressed in the traditional formal dresses for the farewell party. 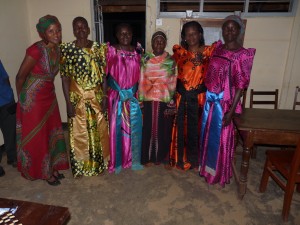 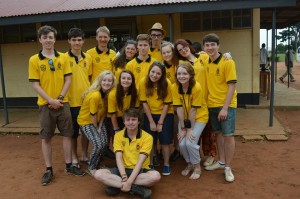 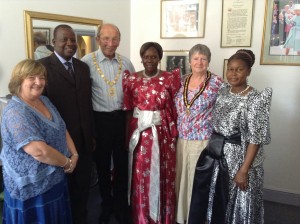 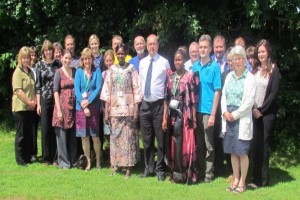 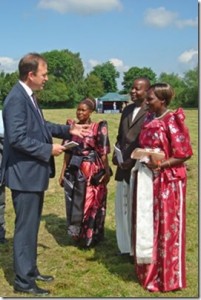 In June 2014, Aggrey Lugenyi headteacher of Ashfield Park’s link school along with Rita Nabujibi and Christine Isaka of Kisiki College visited Ross-on-Wye. They taught in their link schools, visited local schools and met a wide variety of people. The photographs show them with staff from JKHS, at the Mayor’s Parlour meeting Councillor and Mayor Colin Gray as well as at the Riverside Fesitival with Jesse Norman MP.2014 – This year, Nic Wardale led his third group to Uganda and they had a wonderful time at Kisiki College, Jinja and Queen Murchison Falls National Park.