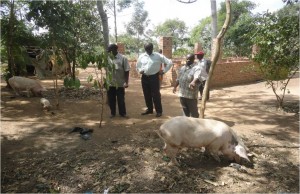 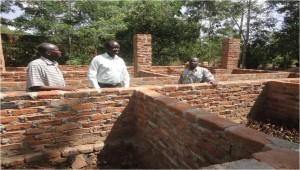 James Mugenyi inspects the new developments at the piggery (February 2015) 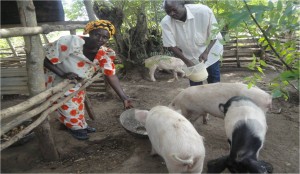 There has been great development in this sphere of our work. The link established with BUMURUDA, a Namutumba area farmers organisation has resulted in a successful piggery being established. From these simple beginnings, young pigs are being given to local farmers who, in turn, pass, on piglets to other farmers. In August 2014 more funds were sent out to consolidate this development.

Most Ugandans are farmers producing about enough to satisfy their own families’ needs with a little surplus for sale – basically subsistence farming.

Ross farmers and the RossNamutumba Link Organisation sent a donation to BURUMUDA in order that they could set up a piggery. The Namutumba farmers have built a pen to house the four pigs and they plan to use them as breeding stock, sending the offspring to other local farmers to perpetuate the programme.

The photo shows Gareth and Peter Hughes in July 2013 at the farmstead that houses the piggery where they met with members of BURUMUDA. 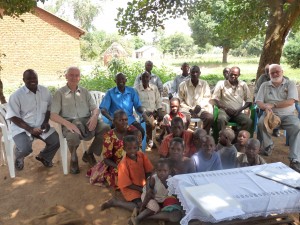