Elizabeth sent an appreciation for the help received from past students of JKHS and the Ross Namutumba Link Group who visited in 2013 towards rebuilding her home. Staff and students of Kisiki College also contributed. Here are pictures of that fateful day. 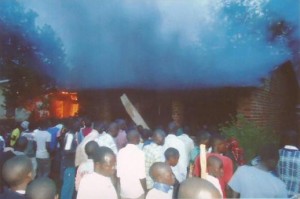 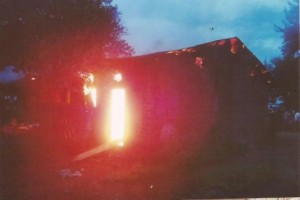 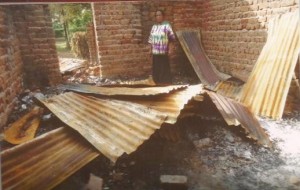 Kisiki College secretary’s house has burnt down in October 2013.

Elizabeth and her son, Kenny, have lost all their possessions. (Liz can be seen in the front row with the 2013 JKHS group).

Like to help? Please take/send your donation to Ruth Till at John Kyrle High School, Ledbury Rd, Ross-on-Wye, HR97ET 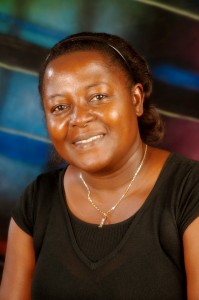 The start of the new year in 2012 saw the appointment of Mrs Irene Nairuba to the post of Headteacher of Kisiki College, with Mrs Deborah Wesonga being relocated to Wanyange Girls School, Jinja as is the custom in Uganda when a Headteacher has served five years at a school.

Mrs Wesonga had worked unstinintingly for KCN and her efforts had been rewarded by the fact that the school has been turned around and has become a high performing school with outstanding examination results, high standards of discipline and a strong work ethos.

She oversaw the building of the Technology block, a huge increase in the school roll and the building of ten new classrooms and a science room.
Mrs Nairuba is committed to taking the school to an even higher plain and values the link with John Kyrle High School and the Ross-Namutumba Link Organisation highly.

The twinning of Ross-on-Wye with Namutumba, Uganda was formalised in 2007 after a long gestation period. The twinning was a natural extension to the myriad of links that had been forged by staff and students of John Kyrle High School, local primary schools, Rotary, Lions, Ross churches and many businesses and individuals.

The Ross-Namutumba Link Organisation has been in the forefront of discussion with both town councils about twinning and is acting as an umbrella organisation helping to consolidate the disparate links, build new ones and also raise funds itself for agreed projects in Namutumba by helping to run a local charity shop currently in The Crofts Shopping Precinct. The first group to benefit is the Namutumba Disability Group.

Disabled young people have also received sewing machines and typewriters so that they may train for employment. 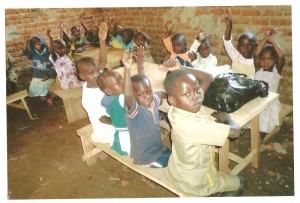 The Technology Block is officially opened when the 2013 John Kyrle High School group visited in July.

Jim Herbert and the Ugandan Minister of Education do the honours. The block is the result of several yearsof fundraising by JKHS students; Sue Jones and Pam Altree and the Friends of St. Mary’s Church and WORKAID who provided the initial equipment for the wood and metal work rooms. 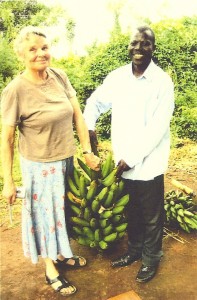 FOUNDER OF THE LINK

It is with great sadness that I have to announce the recent death, on 12th September 2013, of Mrs Frances David. Frances was one of the founders of the JKHS/Kisiki College link and played an active role in Uganda for many years. She will be sorely missed by many people in Uganda and the UK.